Written by
Brittany Mannings
Share on facebook
Share on twitter
Share on linkedin
Share on email
Share on print
Rosie the Riveter was an image that represented the hard working women who took the place of men in the industrial labor force during the war. As men enlisted in the military in large numbers, women kept up production by working in factories. Today, these women dubbed “Rosie the Riveter” may be able to receive a VA pension if they are the surviving spouse of a wartime veteran. 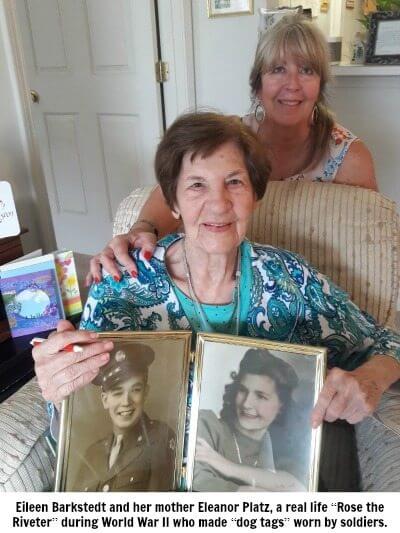 Eleanor Platz, a real life Rose the Riveter, honored her civic duty during World War II making identity tags known as “dog tags” worn by soldiers. “During the war, you know, Rosie the Riveter they called her. We had to work,” Eleanor reminisced. A bus would arrive at 11 o’clock at night and take Eleanor and the other women to an arsenal where they worked until seven in the morning. “We stayed at the arsenal overnight and then we were allowed to leave. That was our job,” Eleanor explained. The bus would then take all the women home after finishing their shift. “I always thought to myself if my friends and family knew I could be making dog tags for them,” Eleanor remembered wondering. Eleanor Platz was married to World War II veteran Arthur Platz who served in the Army’s 28th Infantry. The couple first met when they were in high school in New Jersey. Her friends lived on the same block as Arthur and they all attended the same school. “You know, in those days kids had to work to help themselves. Arthur worked at the bowling alley,” Eleanor said. After high school graduation, she and Arthur did not see each other for a few years. Eleanor went on to study business, typing and shorthand, for a year in Jersey City, New Jersey. She made new friends including a boyfriend. “One day, there was a knock at the door, and who was it? It was Arthur Platz,” Eleanor laughed. Eleanor had a boyfriend and now Arthur was asking her if she would like to go out. “I didn’t want to make that boy feel bad, but I said yes,” Eleanor revealed, remembering the boyfriend she had at the time. She married Arthur a year later. Eleanor married Arthur in December of 1944 before he left to serve overseas in the war. Eleanor recalled the challenges of planning a wedding with ration cards and shortages during wartime. She said that Arthur could not drive a car because of the gas shortage, but a car was needed to drive to where food was available. “We had a very small family wedding, and it was nice,” she shared. Arthur had to report back for duty 10 days later. 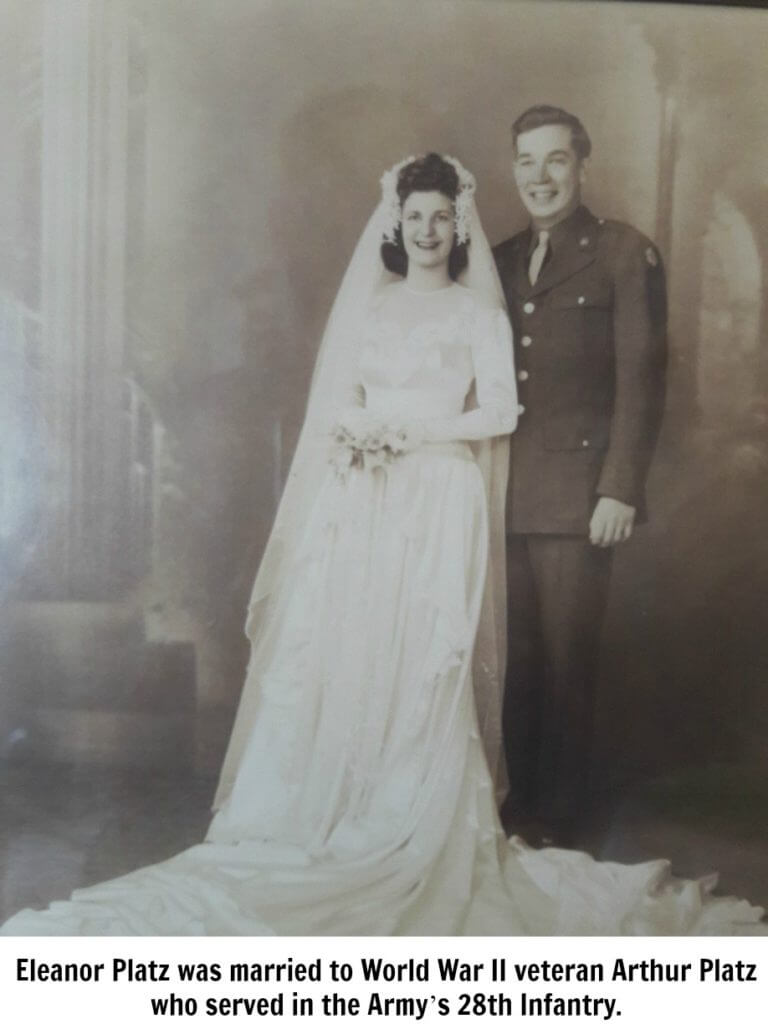 Arthur was stationed in Germany and France during the war while Eleanor worked back home. During the war, Arthur fought in the Battle of the Bulge, which was that last major battle between the Germans and the Allies on the Western Front in Belgium, France and Luxembourg. The Battle of the Bulge started when the Germans launched a surprise attack resulting in heavy losses for American forces. Arthur served on the frontlines of the infantry placing him in harm’s way, but he never told Eleanor until he returned home. “The war ended and Arthur said, ‘Guess what, Eleanor? I might join the paratroopers and you may get to live with me in Germany.’ I said, ‘No thank you. If you don’t come back now, I won’t be here,’” Eleanor laughed. In 1978 at age 56 Arthur passed away from cancer, leaving behind Eleanor and their four children. “I went to Social Security and asked them what to do. They told me to go to work. It is not the right thing to say to a person,” Eleanor recounted. Left without much choice, Eleanor got a job taking care of children in special education. As an older adult, after retiring from work and raising her family, Eleanor faced new challenges at home. Typical of many seniors, Eleanor had some health issues that slowed her down. She found herself needing assistance with activities of daily living such as bathing, meal preparation, medication reminders, etc. In 2017, Eleanor learned about the VetAssist Program from Veterans Home Care through her daughter Eileen who found it online. “I had been looking for help for my mom after she fell and needed assistance with daily life. My sister and I still work and I am quite a distance from her,” Eileen shared. At the time, Eleanor was not eligible for any other programs. The VetAssist Program helps surviving spouses of wartime veterans like Eleanor acquire a little-known Aid and Attendance benefit from the Department of Veterans Affairs (VA). Eleanor now has a homecare aid named Jessica from At Home Companions who comes over to her residence to assist her. “She does whatever I ask her to do, and it is very hard to get someone to wash your floors or clean your bathroom. She does her job and does it well,” she said. Jessica helps Eleanor with chores such as folding laundry and makes lunch for her. She also helps Eleanor with safely getting in and out of the bathtub and putting on difficult clothing items such as elastic stockings. Jessica goes out shopping for Eleanor, too. “I think she is very nice and very efficient,” Eleanor said about Jessica. When asked whether she would recommend the VetAssist Program to another person, Eleanor’s answer was a resounding yes. “Definitely, because at first I did not get on Medicaid or anything like that.” Now Eleanor has the VA benefits she deserves. As a wartime wife who worked long nights in an arsenal and supported her courageous husband as he served his country overseas, Eleanor lives up to the Rosie the Riveter name. If you or a loved one is in need of in-home care, contact Veterans Home Care to find out if you are eligible for the VetAssist Program, 888-314-6075, www.veteranshomecare.com or info@veteranshomecare.
Share on facebook
Share on twitter
Share on linkedin
Share on email
Share on print
Veterans Home Care - VA Aid and Attendance Pension Benefit