Vietnam Era Veteran Roger Ross, now 79 years old living in St. Louis, enjoys the VA benefits he earned as an Air Force cook and recalls fond memories serving his country. “I enlisted when I was 18. I wanted a better life for myself, to learn and get experience for a better job after service. I got to travel, see places that I’d never been. Overall, I have lots of good memories. I met good friends and served under exceptional sergeants and officers. I wouldn’t trade it for anything,” says Ross. Though he and a friend enlisted together in May 1961, they never saw each other after bootcamp at Lackland Air Force Base in Texas. He earned a Small Arms Expert Marksmanship Ribbon yet says the only time he ever shot a gun was during basic training. “I had good eye and a steady hand.”

Ross left active duty in 1965 and remained in the Air Force Reserves from 1966-67. He returned to St. Louis, married and had two children, Rozlyn Elaine and Gary. After working several jobs including at department store Famous Barr, he had a longtime career and retired from the City of St. Louis. His wife Curlie B. Ross passed away January 21, 1999.

During retirement, Ross experienced some health issues and decided he needed assistance at home. In 2019, he contacted Veterans Home Care, a family-owned company that offers in home care with no-out-of-pocket costs. Veterans Home Care put him in touch with Natavia Boyd-Wells founder of one of their VetAssist network providers, Touch of the Heart Home Health Care. Now Ross has in home caregiver who helps with, light housekeeping, laundry and other personal care. No longer cooking for masses, he prefers heating things in the microwave and also has a caregiver to assist with meal preparation. The cost of his care is offset by the VA’s Aid and Attendance benefit. Veterans Home Care helped Ross with all the initial VA paperwork and got his care started before VA funds arrived.

Using Alexa with his VetAssist Companion

Another feature of the VetAssist Program is the VetAssist Companion, an Alexa powered medical alert and voice-activated video calling system that keeps Ross engaged. “I ask Alexa about the weather and news. Just about anything I ask her, she has an answer,” says Ross. While ownership of Alexa enabled smart speakers is highest among Americans between 18 and 29, Ross is among Veterans Home Care’s older adult clients who are embracing this new technology for virtual assistance and more. “I like asking Alexa to play music. I have to make some doctor appointments at the VA. When I do, I might ask Alexa to remind me when the appointments are.” 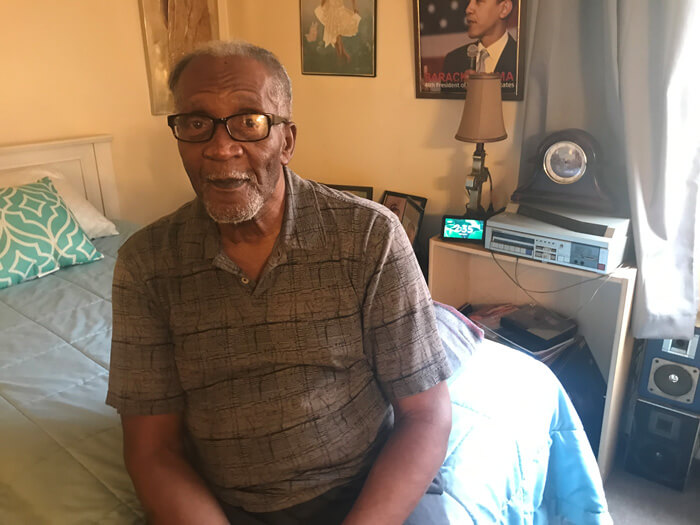 After basic training, Ross went to Ft. Lee, VA from July-October 1961 for cooking school. Today, Ft. Lee is home to the Air Force’s 345 Training Squadron and the Army Quartermaster School, renowned for teaching not only basic food service but also how to prepare sophisticated, seven course meals, and fancy pastries.

Proposed Renaming of Fort Lee in 2024

Singing at Base Talent Show and Life on Base

Ross did travel as he intended and lived on many bases including Walker AFB, formerly Roswell Army Airfield, in New Mexico known for the Roswell UFO incident, an event that occurred long before he was there. He was also stationed at Travis AFB in California where he was released from active duty. Once, Ross was even part of an airman’s vocal group that won a base talent show, singing, two songs made popular by the Turbans, “When You Dance” and “Let Me Show You Around My Heart.” Alas, the group didn’t advance at the next competition but Ross had fun nonetheless.

There were also sad, tense and challenging times. He recalls around the Cuban Missile Crisis in Fall 1961. The crisis in Cuba centered on conflict between the United States, led by John F. Kennedy, and the Soviet Union, led by Nikita Khrushchev, and Soviet ally Cuba, led by Fidel Castro. The Soviets were arming Cuba with missiles equipped with nuclear warheads ready to fire on the United States. In retaliation, Kennedy ordered a blockade of Soviet ships bound for Cuba. Roger Ross and his fellow air force cooks worked 12-hour days from 6:00 p.m. to 6:00 a.m. to support airman and their many flying missions. “We did what we had to do to serve pilots, ground crews and guys guarding planes working all hours of the night coming into the mess hall,” says Ross. Most of Ross’s active duty was at Andersen Air Force Base in Guam where he cooked with other airman and some local Filipino civilians who were hired to work in the mess hall. He was there November 22, 1963 when President Kennedy was shot and killed. “All the guys were really sad, black and white guys alike. Kennedy was a popular president especially among blacks who saw Kennedy furthering civil rights.

Serving as an Air Force cook earned Ross the Air Force Good Conduct Medal and VA benefits. This enabled him to seek medical care at a VHA health facility and receive a monthly Pension with Aid and Attendance through the VBA. “Many are aware of the VHA’s medical services but not as many are aware of the Pension with Aid and Attendance,” says Robin Borders, Vice President of Veterans Home Care.

To get help for the hero in your family, including a surviving spouse of a wartime veteran, go to www.veteranshomecare.com or call 888-314-6075. For seniors who do not have a military background, SmartCompanion is identical to the VetAssist Companion system and available by calling 855-488-1081 or visiting www.smartcompanion.care