Joanne Banks in Fordland, MO (near Springfield) lives with and cares for her 90-year-old, widowed mother, once a Japanese war bride.  Her mother receives a VA benefit for elder care due to her father’s military service during both World War II and the Korean Conflict.

Joanne says you never really know much about a person at first glance. That definitely rings true for Joanne’s mother, Kazuko Kitayama Regnier who’s lived in Korea, Japan, Germany, and settled in Midwestern United States. She’s lived a remarkable, culturally diverse life not typical of a stereotypical woman in a small Missouri town.

What is a Japanese War Bride?

Kazuko is one of thousands of Japanese women who moved to the United States after World War II with their new husbands, American soldiers. They began new families while expanding and enriching American culture.

What difficulties did war brides face?

Kazuko says her greatest difficulty was learning and understanding the English language. The War Brides Act of 1945 allowed servicemen to bring the wives they married while stationed abroad to the United States on a non-quota basis and without regard to racial exclusion laws. The War Brides Act ended in 1948 but was re-instated in 1950.

Kazuko says she became friends with other war brides and didn’t feel isolated or face much prejudice.

Eager to financially support her new family, she worked a variety of jobs and was determined to get her driver’s license. She was hard working as a hospital cook and housekeeper, proudly passing inspections. She also worked as a waitress and in a tofu factory in Hawaii. She studied hard and received her American citizenship.
Kazuko’s father was Korean. Her mother was Japanese. Her Japanese name, Kazuko, combines kazu (“harmony”) with ko (“child”), creating a name that means “child of peace.” In America, she shortened her name to Kaz (pronounced cause) like some other Japanese war brides who used American nicknames.

Surviving the Occupation of Korea and the Atomic
Bombs in Japan

Kazuko was born in 1931 when peace was scarce in most of the world. It was the onset of World War II. Japan’s imperialist government had been occupying and ruling Korea since 1910.

As a child, Kazuko lived in Japan for a while with her parents and siblings escaping some of the harsh treatment Koreans endured under Japanese rule. When Pearl Harbor in Hawaii was attacked by the Japanese December 7, 1941, the United States entered the war against Japan and its ally Germany. By the end of World War II, the family was living in Korea escaping the horrors of the atomic bombs dropped on the Japanese islands of Hiroshima and Nagasaki in August 1945.

When her mother was pregnant with her fifth sibling, her parents split up. Her father took three of the children to live in Korea. Her mother took Kazuko, another child and the one she carried to live in Japan.

Living In Japan As WWII Ends and American Occupation of Japan

Soon after the atomic bombs, Japan surrendered to the United States and their allies. The treaty was signed September 2, 1945, known as V-J Day, ending the second world war. Japan was occupied by the U.S. military under the command of General Douglas McArthur from 1945-1952. After the war, most of Japan’s cities were devastated and times were difficult for many of the Japanese. Kazuko remembers not having enough to eat and scavenging through trash cans for food.

Kazuko Meets Her Husband During U.S. Occupation of Japan

Meanwhile Ellis Regnier, a former farmhand born in Aurora, Kansas in 1916, was a sergeant in the U.S. army stationed in Japan. According to his DD2-14 paperwork, Ellis enlisted in the Army in 1937, prior to World War II. He served during both WWII and the Korean War. He arrived in Japan in February 1947. He was 5’ 5” tall and 152 lbs. with blue eyes and brown hair. He met Kazuko and they married in 1951 in Kobe, Japan. Ellis was 35 and divorced. Kazuko was 20.

Ellis Regnier Known as a Drill Sergeant and Math Whiz

Likewise, Ellis had a rough childhood. He was the one of five boys and when his mother died. He filled in for his mother doing much of the housework and caring for the younger ones. Eventually, his youngest brother was taken in by another family. Ellis completed three years of high school then earned his G.E.D in the army.

His 27-year military career took him all over including in Japan, Germany, Hawaii and California. He was a math whiz, says his daughter Joanne. In the army, he had many roles including drill sergeant and a math teacher. 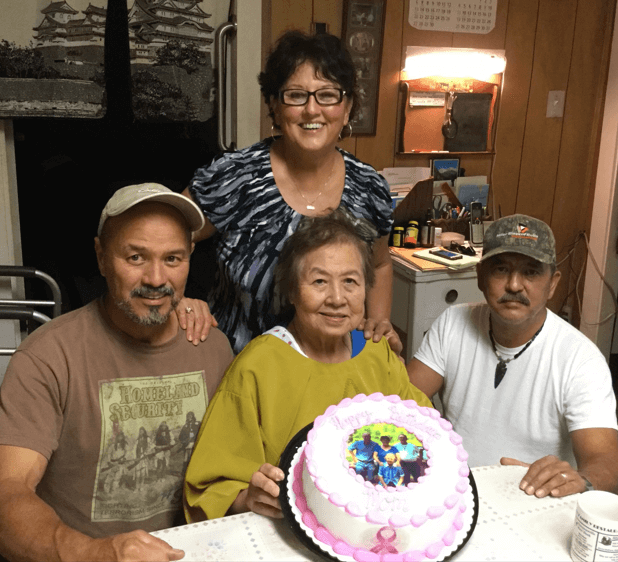 Together Kazuko and Ellis had 3 children, Joanne, Ron and Frank. Joanne recalls living in Germany at age 4 or 5 and speaking German. Eventually, Ellis brought wife and family to the Midwest. After leaving the military, he worked at IBM.

Ellis died at age 87 in April 2003. After his death, in her senior years, Kazuko went to live with her son Frank in Lawrence, KS then moved in with her daughter Joanne.

Kazuko stays active with her friends and family including six grandchildren. Her daughter cooks both Japanese and American cuisine for her and takes her to nearby concerts. “She loves ENKA and one of her favorite singers is Misora Hibari,” says Joanne.

“About seven years ago, Mom got sick and we knew she needed more care. She didn’t qualify for Medicaid, so a caseworker recommended Veterans Home Care’s VetAssist Program. Kazuko was eligible as the surviving spouse of a wartime veteran.

“I would do this again for my mother in a heartbeat,” says Joanne about contacting Veterans Home Care. “I’ve recommended their service to others. It’s a lot of paperwork to get started but it’s well worth it.”

There are others who offer free help with the VA Aid and Attendance application but Veterans Home Care is different in that it gets care started right away, even before VA funding arrives.

Kazuko and her family are sharing their story so others can learn about VA benefits for senior care. Certain wartime veterans or their surviving spouses who choose to use their VA Aid and Attendance benefit primarily for in-home care or adult daycare are eligible.