Flag Day on June 14, is not a federally recognized holiday, but that doesn’t make it any less important for those of us who make honoring our country and our veterans a part of our everyday lives.

When is Flag Day? What are the origins of Flag Day?

Flag Day, celebrated annually on June 14, has been observed each year since 1916 when President Woodrow Wilson issued a proclamation honoring our nation’s Stars & Stripes. The 14th day of June was selected specifically to honor the day in 1777 when the Continental Congress adopted the official flag  Even before President Wilson’s proclamation, a history teacher in Wisconsin, Bernard J. Cigrand, encouraged his students to take it upon themselves to celebrate the Flag’s “birthday.” His movement gained momentum when an essay he penned was published in a Chicago newspaper. Cigrand wasn’t the only American to encourage honoring our flag. William Kerr of Pennsylvania and George Morris of Connecticut also dedicated their time to the flag of our great nation. Despite growing support, it wasn’t until 1949 that the US Congress officially established that June 14 be recognized as Flag Day. 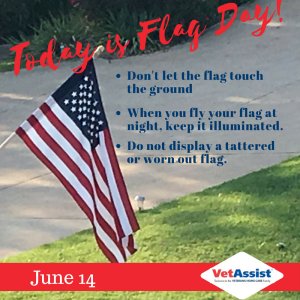 Honoring our Flag and our Veterans

Not all of us possess the creative genius and expressionism of Francis Scott Key – who watched Mary Pickersgills’ Star-Spangled Banner fly above Fort McHenry during the War of 1812. However, there are numerous things that we as Americans can do to honor our Flag – and our Veterans – that do not involve writing a poem that becomes the National Anthem. Simple tasks to ensure that the flag is displayed correctly are ways of showing respect for the flag and all that it represents.

Correct Display of the American Flag

The best way to show support of the flag (and veterans) is to get yourself a flag and fly it – proudly and correctly.

Veterans and the Flag

One of the more moving ceremonies and traditions involving our flag is its prominence in a military funeral. The blue field is draped above the head of the deceased veteran while the rest of the flag is spread across the length of the casket. Anyone who has witnessed a military funeral can attest that the ceremony is breathtakingly beautiful.

The Department of Veteran’s Affairs provides one complimentary flag for the purpose of draping over a deceased veteran’s casket or urn during funeral services. All veterans who honorably served in any branch of the military are eligible to receive one flag from the VA.

Nicknames for the Flag

It’s known as the U.S. flag or the American flag. The Stars & Stripes, Old Glory, the Star-Spangled Banner, or the Red, White and Blue – all  nicknames for the official flag of the United States of America. The “canton” or “union” of the flag is the section with 50 white stars on the navy blud backround representing all 50 states.

Days for the Flag

This Flag Day, grab yourself an American Flag and display it  proudly in honor of all of the veterans who sacrificed to make our country the land of the free and the home of the brave.

Other days appropriate for displaying the flag are:

History of our Flag

“Old Glory” certainly has a story worth sharing. After the start of the Revolutionary War, the colonists raised the “Continental Colours,” the first official flag of the Continental Army and the first to have 13 stripes to represent the colonies. On June 14, 1777, the first official national flag was approved by the 2nd Continental Congress. They stated: “Resolved, that the flag of the United States be thirteen stripes, alternate red and white; and the union be thirteen stars, white in a blue field representing a new constellation.”

Flag designers took liberty with the blue field and thirteen stars to represent the new constellation – but the most popular of which was known as the Betsy Ross flag. Although attributing this flag back to Betsy Ross is largely unsubstantiated, most Americans hear her name and picture the 13 red and white stripes with the 13 white stars in a circle on the field of blue. In the time after the Revolutionary War, a second flag resolution was passed – to add stars for each new state admitted to the Union.

Between 1777 and 1960, 27 changes were made to the Stars & Stripes. Most of these (25) were to accommodate new states. The other two pertained to the specific size and colors used. The third and final Congressional Resolution mandated that the flag of the United States of America would always have 13 alternating red and white stripes to represent the original 13 colonies. The number of stars would always match the number of states in the Union, with all new stars added on the July 4th following that state’s admission.

While there has never been an official explanation of the use of the colors red, white and blue, Continental Congress secretary Charles Thomson suggested that the red color would signify hardiness and valor; the white would represent innocence; the blue to stand for perseverance, vigilance and justice.

At Veterans Home Care, we honor veterans for their service with free help accessing a little-known VA benefit for custodial care.

If you are a veteran who is 65 or older, or a surviving spouse of a deceased veteran, and you need assistance with in-home care, please call 888-314-6075.