Veterans Home Care is proud to be able help our veterans who defended our homeland. One such person is Arthur Jaron. Mr. Jaron wanted to join the fight so badly that he doctored his birth certificate so he could enlist when he was actually only 17. When his mother found out, she had him go down and admit what he did and wait until he was 18. Mr. Jaron shared with us a letter his mother received after he was deployed to Alaska from Philip Bernstein of the Committee on Army and Navy Religious Activities, National Jewish Welfare Board. Veterans Home Care salutes Mr. Jaron for his service and the millions of other veterans and their families who were ready and willing to make the ultimate sacrifice for our country. 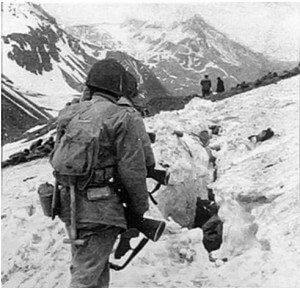 Every American schoolchild is taught about the surprise Japanese attack on Pearl Harbor on December 7, 1941. The attack killed 2,403 U.S. personnel, including 68 civilians, and 1,178 others were wounded. Nineteen U.S. Navy ships were destroyed or damaged including eight battleships. The attack was the impetus for the United States to enter into the war against Japan, Germany and the Axis countries.
Surprisingly though, very few people know about the Japanese attack on the Aleutian Islands, which was part of the Alaska Territory at the time. On June 3, 1942 a small contingent of Japanese forces occupied the islands of Attu and Kiska. Due to the geography and weather conditions in the area, it took nearly a full year for a combined U.S.-Canadian force to drive them from the islands. The conflict is referred to as the “Forgotten Battle” due to it being overshadowed by the far larger Battle of Midway being conducted at the same time. Some historians have even surmised that the Japanese attack was actually a maneuver to draw forces in the U.S. Pacific Fleet away from the Midway Atoll to the Aleutians. Other historians believe that the Japanese invaded the Aleutians as a protection of Japan’s northern flank.
The fight to reclaim Attu was launched on May 11, 1943. The Japanese fought to the bitter end attempting one final banzai charge that was defeated by the larger U.S.-Canadian forces. On May 29, the island was officially back under U.S. control. On August 15, after a three week naval barrage of Kiska, the U.S.-Canadian forces landed only to find that the Japanese had abandoned the island on July 29.
We are proud to salute our nation’s veterans and share their stories. At Veterans Home Care, we’ve helped thousands of veterans and surviving spouses get the care they need. Our exclusive VetAssist Program assists wartime veterans and their families in applying for a little-known benefit from the Department of Veterans Affairs, (VA) to pay for assistance with activities of daily living. This includes home care and adult day care. To learn more, call us at 888-314-6075.
Veterans Home Care - VA Aid and Attendance Pension Benefit