Viola Florence Fraizer is celebrating her 100th birthday on November 23, 2002, and this event has reunited some family members who haven’t been together in 40 years.
Fraizer was one of nine children. She married Floyd Fraizer who was one of 13. Their son Harold Fraizer says he has more cousins than he can count and when 15 family members met at a small reunion November 5 at Red Lobster at 1350 W 104th Ave, Northglenn, CO to celebrate his mother’s 100th birthday, some hadn’t seen each other in decades.

Members of the Harvest Baptist Church in Ovid, Co, where Harold is an elder, sent Viola flowers and balloons.

“It was a fun time for all of us. Mom was ecstatic about seeing her nieces and nephews on November 5. Her actual birthday is November 23. Red Lobster is Mom’s favorite place to go,” says Harold. Another party in Viola’s honor was held at the Calvary Baptist Church in Northglenn November 20.

Having some dementia, Harold isn’t sure she remembers the party nonetheless it brought her joy and another party is planned with other family and friends. “I call her every day and she still recognizes me,” says Harold who lives in Big Springs, NE.
Viola and Floyd had three children: Harold, Julia and Rosalyn who died of cancer. Viola always enjoyed crafting and crocheting. Until about three years ago, she lived independently. Then macular degeneration and age took its toll. With impaired vision and hearing and dementia, she moved in with her daughter, Julia in North Glenn, Co outside of Denver.

Viola’s husband Floyd died in 2002 at the age of 85 after suffering a heart attack. His military service during World War II qualified Viola for a little-known VA benefit called Aid and Attendance that helps her today. So now Viola has an in-home caregiver through the VetAssist Program and Comfort Keepers with no out-of-pocket costs.

“This VA benefit has been a blessing. Without it she would be destitute. I’d recommend VetAssist and Comfort Keepers to others, says Harold. The VetAssist Program is offered by Veterans Home Care, a private company that contracts other private companies such as Comfort Keepers to provide care such as help with dressing, bathing, light housekeeping, medication reminders and more. VetAssist provides free help with VA paperwork and other services.

Floyd enlisted in 1944 while living in Ohio. Rumor had it the Marines were suffering many casualties and recruiting replacement Marines. To avoid a shortened life span and improve his odds, he signed up to be a plane mechanic. Having completed eighth grade, he wanted to do his best on the test so he’d qualify for extensive training and further his education. Instead, he passed the test with flying colors which eliminated him for training and sent him to service planes at Patterson Air Force Base. 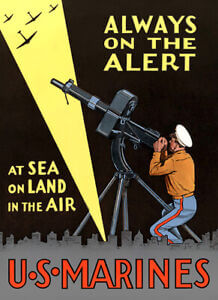 As a mechanic stationed in the Central Pacific area until September 1945, he didn’t escape harm’s way. He kept his rifle handy at all times as the mechanics were often shot at while fixing planes. After the war, he served in the Marine Reserves from 1947 to 1951. Per his records, he was not wounded and was awarded the Good Conduct Medal.

“Growing up during the Great Depression, my Dad didn’t have much chance for an education. His father died when he was 12 years old, so as a kid he worked to support the family. He was very intelligent. When he went to the grocery store, he could add up the cost while waiting at the check-out counter and get it right to the penny,” says Harold.

We all wish Viola a very happy 100th birthday and hope word gets out to her many nieces and nephews reminding them to wish her well.